Home » Semantic technologies » Why does the OWL Reasoner ignore my Constraint?

Why does the OWL Reasoner ignore my Constraint?

A most frustrating problem often encountered by people, with experience in relational databases when they are introduced to OWL ontologies, is that OWL ontology reasoners seem to ignore constraints. In this post I give examples of this problem, explain why they happen and I provide ways to deal with each example.

A typical example encountered in relational databases is that of modeling orders with orderlines, which can be modeled via Orders and Orderlines tables where the Orderlines table has a foreign key constraint to the Orders table. A related OWL ontology is given in Figure 1. It creates as expected Order and Orderline classes with a hasOrder object property. That individuals of Orderline are necessarily associated with one order is enforced by Orderline being a subclass of hasOrder
exactly 1 owl:Thing. 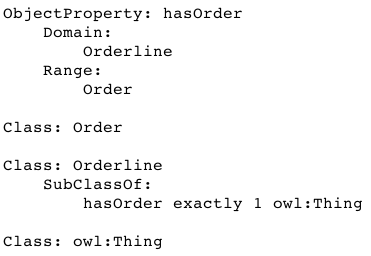 Say we create an individual orderline123 of type Orderline, which is not associated with an individual of type Order, in this case the reasoner will not give an inconsistency. The reason for this is due to the open world assumption. Informally it means that the only inferences that the reasoner can make from an ontology is based on explicit information stated in the ontology or what can derived from explicit stated information.

Too Many Associated Individuals Problem

Assume we now change our definition of our orderline123 individual to be associated via hasOrder to two individuals of Order as shown in Figure 3. Again, most frustratingly the reasoner does not find that the ontology is inconsistent. The reason for this is that OWL does not make the unique name assumption. This means that individuals with different names can be assumed by the reasoner to represent a single individual. To force the reasoner to see order1 and order2 as necessarily different, you can state order1 is different from order2 by adding DifferentFrom:order2 to order1 (or similarly for order2).

The source of the problems described here is due to the difference between the
purposes of a relational database and an OWL reasoner. The main purpose of a
relational database is to enable view and edit access of the data in such a way that the integrity of the data is maintained. A relational database will ensure that the data adheres to the constraints of its schema, but it cannot make any claims beyond what is stated by the data it contains. The main purpose of an OWL reasoner is to derive inferences from statements and facts. As an example, from the statement Class: Dog SubclassOf: Animal and the fact Individual: pluto Type: Dog it can be derived that pluto is an Animal, even though the ontology nowhere states explicitly that pluto is an Animal.

Many newcomers to OWL ontologies get tripped up by the difference in purpose of relational databases and OWL ontologies. In this post I explained these pitfalls and how to deal with them.

If you have an ontology modeling problem, you are welcome leaving a comment detailing the problem.

By Henriette Harmse in Semantic technologies on March 9, 2018.
← Risk Based Testing Using Jena and SHACL to validate RDF Data →