For many starting out with OWL ontologies understanding the exact meaning of property restrictions can be challenging. In this post I will use visual representations to explain the meaning of existential property restrictions. For the purpose of this post, we start out with a simple ontology for modelling the relation between a person and their pets. You can model this in the free Protégé ontology editor.

I have specified this ontology using the OWL 2 Manchester syntax. Other syntax can be used as well, notably the functional-style syntax, which is used to define the direct semantics of OWL 2. In this post I use the Manchester syntax because it tends to be more intuitive to non-logicians, but it has some weaknesses which I will point out when we get to it. Also for clarity and compactness I have omitted the prefixes.

This ontology states that in our domain we have persons (Class: Person) and pets (Class: Pet). Persons cannot be pets, and pets cannot be persons (Class: Pet DisjointWith: Person). Cats (Class: Cat SubClassOf: Pet) and dogs (Class: Dog SubClassOf: Pet) are pets. We further assume that cats and dogs are the only pets in our domain, and a cat is not a dog and vice versa (Class: Pet DisjointUnionOf: Cat, Dog). I have also defined an owns object property, which
will be the basis of our discussions on existential property restrictions. You can run the reasoner to confirm for yourself that this ontology is indeed consistent, that is, it contains no logical contradictions. 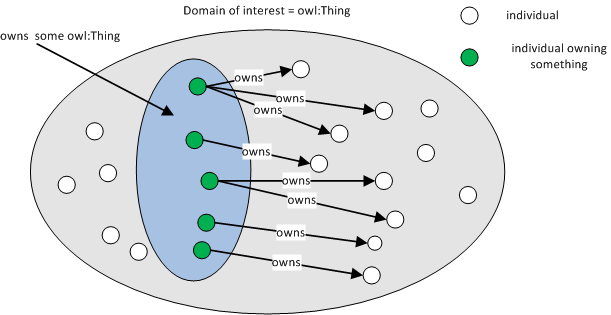 In Figure 1 I have illustrated an example domain consisting of some individuals (the small circles) and some owns properties (the arrows) that exist between individuals. At this stage I have not indicated the Person or Pet classes as yet. The meaning of owns some owl:Thing is that it represents the set of those individuals that we know owns something. In our example it consists of the individuals represented by the green circles (i.e. 5 individuals). Note that due to the open world assumption, we cannot assume that individuals that do not form part of the owns property, necessarily do not own anything. Rather, OWL reasoners assume that it is not know whether these individuals own something or do not own something. Because owns some owl:Thing represents a set OWL reasoners and ontology editors some times refer to an expression like owns some owl:Thing as an anonymous class. I.e. it is a class just like Person, but unlike Person it does not have name. 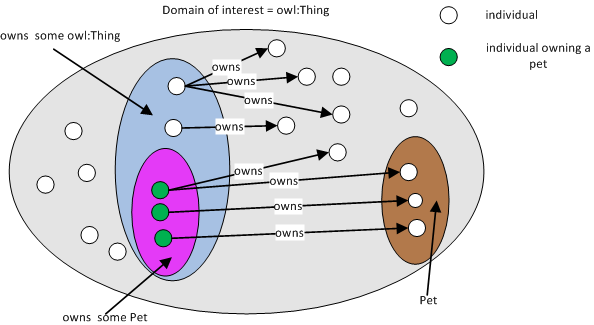 To refer specifically to owners of pets we have to define our existential property restriction as owns some Pet. This is illustrated in Figure 2. As you can see owns some Pet is a subset (subclass) of owns some owl:Thing.

Assume now we want to model a person that loves animals as someone who has at least 1 pet. We can model this as follows:

To test our ontology we create an individual without a pet.

Explanations are minimal. That means that if you remove any 1 of the reasons given in an explanation, it is no longer an explanation for the inconsistency (or an entailment). Hence,

An incorrect assumption we may make based on the design of our ontology is that when ever an individual has a pet, the reasoner will infer that the individual is an AnimalLover. However, as I said, this assumption is incorrect. Thus, changing our ontology as follows

will not result in inferring that aPetOwner is an AnimalLover. 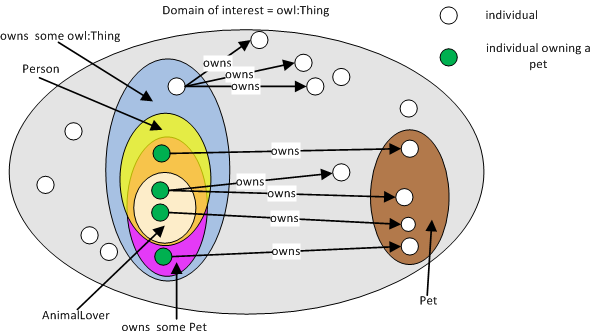 To understand this see Figure 4. Because we have defined AnimalLover as a subclass of owns some Pet it means the following possibilities exist:

Hence, from our current ontology, the reasoner can infer nothing more.

Note that if you now save your ontology in Manchester syntax, you will loose the owns some Pet SubClassOf: AnimalLover general class axiom. Rather save it in say RDF/XML or OWL/XML syntax. We also add the following individuals:

One reason why this design may not be ideal is that if we again consider the case where an individual anAnimalLoverWithoutAPet of type AnimalLover does not have a pet (as defined in the previous section), it will not give an inconsistency. To understand the reason why the reasoner cannot make this inference, see Figure 5. Because we defined owns some Pet SubClassOf: AnimalLover the possibility exists that there are AnimalLovers who do not own any pets. 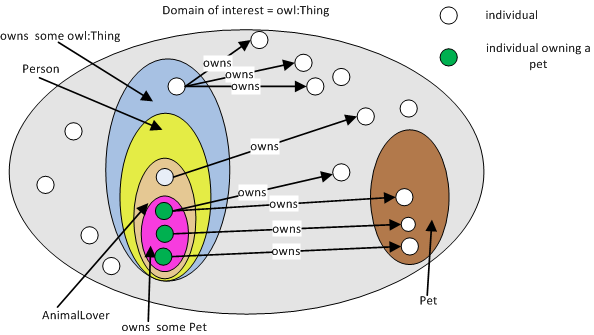 Does this mean it is better to define classes in terms of equivalence rather than subclasses? No. In this instance it turned out to be the case only because we made the assumption that AnimalLovers are equivalent to someone owning a pet. Clearly in reality there may be people owning pets but who do not like pets. Hence, given other assumptions a different ontology may have been a better choice.

The purpose of this post is to explain the meaning of existential property restrictions. For this reason I did not consider using domain and range restrictions to enable inferring that someone who owns a pet is necessarily an AnimalLover. This can easily be achieved by stating

The example ontologies of this post can be found in github.