Home » The mathematics of object orientation

At some level OWL seem to be very similar to UML, but there are important differences that you have to keep in mind. In this post I detail features you will have to do without coming from a coding or object orientation perspective when you start using OWL. These are:

Classes do not have Attributes

Programmers are used to classes that have attributes or properties. This is also referred to as instance/member variables of the class. In OWL classes do not have properties. Rather, properties can be used to model relations that exist between classes and data types. You can however state that a class is a subclass of something that has some property. I.e.,

which states that a Course is a subclass of things that have some
Subject. I explain this here and here.

There are no Methods nor Interfaces

This may seem like silly a comment, but is worth making it explicit: “OWL does not have methods”. Why not? Well, OWL is not a programming language nor a modelling language for designing software. It is a conceptual modelling language. Can you model methods in OWL? Yes, I have done it here to find software modelling heuristic violations, but it is not trivial. However, even if you can define the conceptual notion of a method, there is no way to execute methods in OWL. Again, because it is not a programming language.

What about interfaces? Well, since there are no methods in OWL, there are no interfaces either. In programming the idea is that an interface defines the signature of an interaction, usually in terms of method signatures, without specifying how the methods are actually implemented. This allows for the same interface to have different implementations.

Neither are there Abstract Classes

Abstract classes in programming are used to enable programmers to only implement a subset of the interfaces specified, thereby forcing subclasses to do the implementation. However, again since interfaces do not exist, and there are no methods, it does not make sense for OWL to support abstract classes.

This far we have only considered UML classes where the attributes are primitive types rather than classes. Here we will consider UML classes that have classes as attributes. Assume we want to model projects. Assume a project must have one name, one sponsor that must be a manager and it must have a team of between 3 and 10 employees. In UML this can be stated using attributes (see Fig.1(a)) or associations (see Fig. 1(b)). For interest sake Wazlawick [1] suggests using attribute notation for data types and associations for classes. His motivation is that associations makes dependencies between classes more apparent. I usually follow this guideline myself. 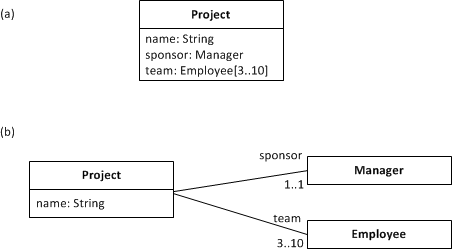 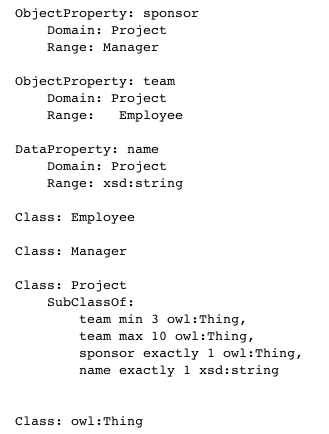 In this post we will look at how different types of inheritance can be translated to OWL. We consider the case where Person is specialized by Employee and Client (Fig. 1). In a UML class diagram if inheritance is not annotated the default annotation {incomplete, disjoint} is assumed. incomplete means there are instances of Person which are neither of type Employee nor Client. disjoint means there is no instance of Person that is both of type Employee and of type Client. The set representation is given in Fig. 2 and the OWL translation in Fig. 3. 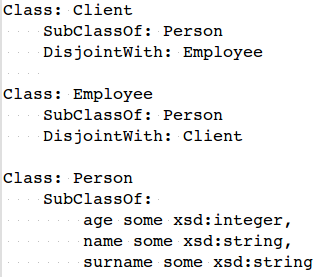 The annotation {complete, disjoint} means every instance of Person is either a instance of Employee or an instance of Client(Fig. 4). The corresponding Venn diagram is  given in Fig. 5 and the OWL translation in Fig. 6. 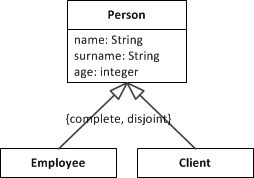 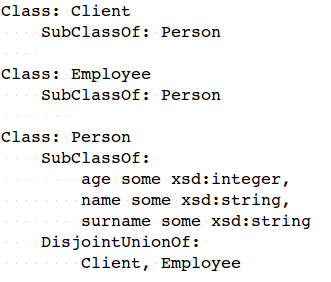 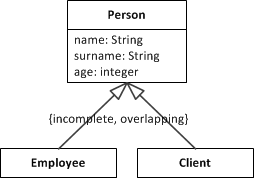 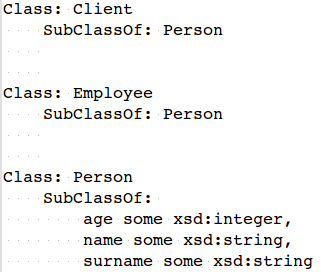 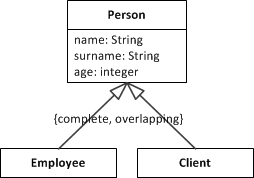 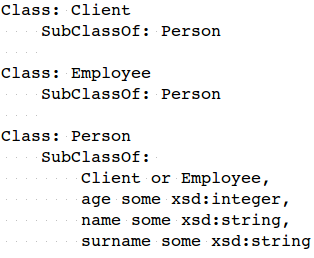